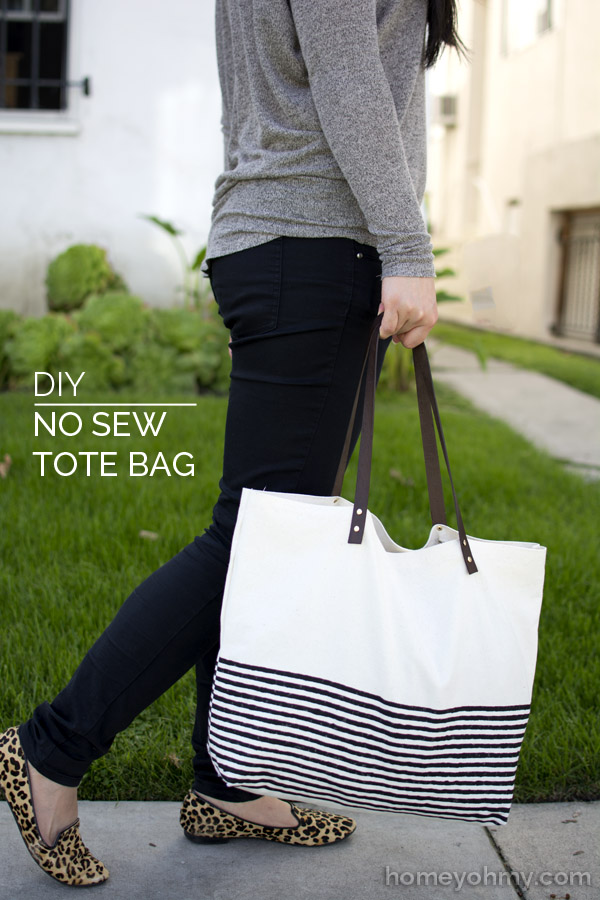 Guys, I have to say I’m really proud of this one, though it was both simple and a bit difficult.  Difficult because it required a lot of steps and because I’m going to have a hard time explaining them (I apologize in advance), but simple because there is NO SEWING required!  Hallelujah!

When I first set out to make this tote bag, I did some research to see what kind of no sew tutorials were out there, and to my surprise there weren’t many at all that I came across.  So if you’re in the I-don’t-have-a-sewing-machine camp like I am or have a general interest in not using a sewing machine, then hopefully this DIY will help you out!

(affiliate link)
-awl
-faux leather handles with holes (I got mine with pre-made holes at the ends so that I wouldn’t have to get a leather punch)
-Martha Stewart Satin Paint in Beetle Black (I recommend this particular paint because it does not require fabric medium. You can just paint and go!)
-pouncer
-1/8″ tape

I started with two canvas pieces that I measured and cut to 18″ x 21″.  The rest of the steps detailed from here on out will be done to each of these pieces. 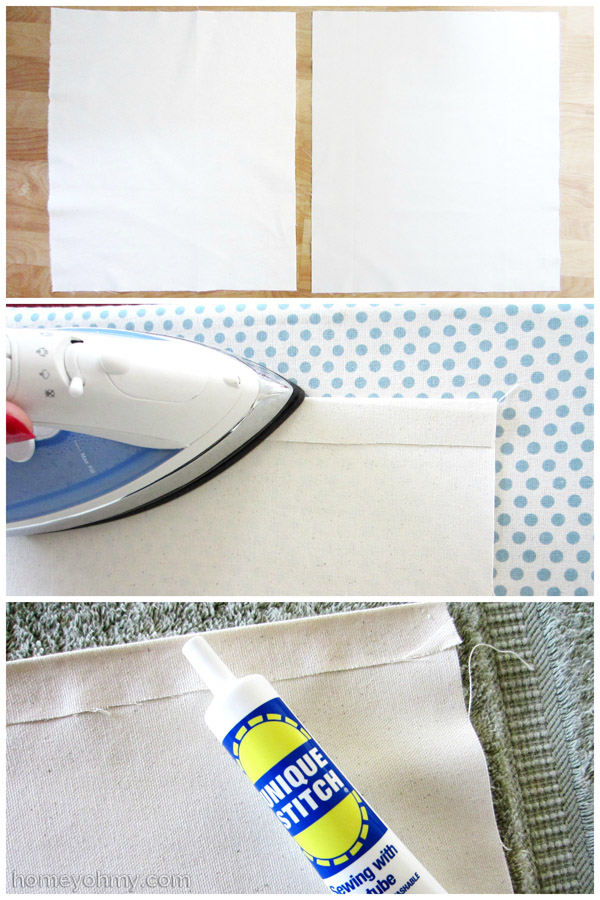 On the edge that’s 21″ long, I folded over about a half inch and ironed it down.  Under this fold, I applied Unique Stitch, the one thing that made this entire DIY possible.  This stuff HOLDS.  The key, at least that I’ve found,  is to use a generous amount, not to the point where it’s globbing out the edges of the fabric, but enough to soak through the layers of fabric that are being melded together.  Make sure to protect your surface like I did in the photo above with an old towel.

The next steps are for painting the stripes.  I protected my surface with a towel again since the paint will seep through the back.

I flipped the canvas over to the front side, which is the side that does not show the folded over edge that was just glued down.  The top of the bag will be this folded edge, which I had to keep in mind to make sure I painted my design on the right way. 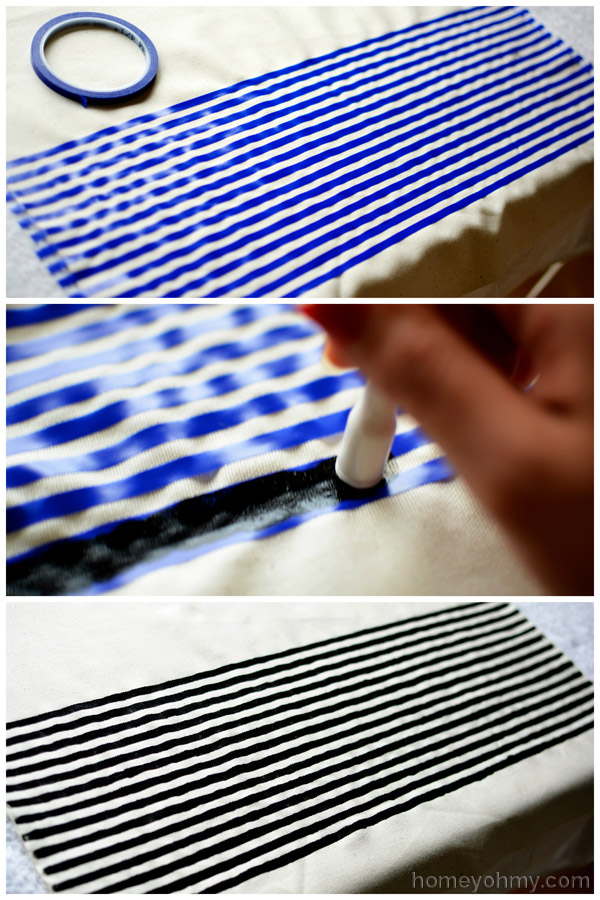 It would take three years to smooth out the bubbling in the tape shown in the top photo above, and ain’t nobody got time for that, so I rolled with it.  Since this meant that I wouldn’t be achieving clean and crisp lines, I tried to stay consistent with this “organic” look and didn’t pounce on the paint completely opaque everywhere.  You can see there are some parts of the stripes that look like not enough paint was applied (I did that on purpose, I swear!).  I didn’t paint stripes on the bottom three inches of the fabric since it would become the bottom of the bag, which you’ll see how later.

Next I measured where to attach the leather handles. 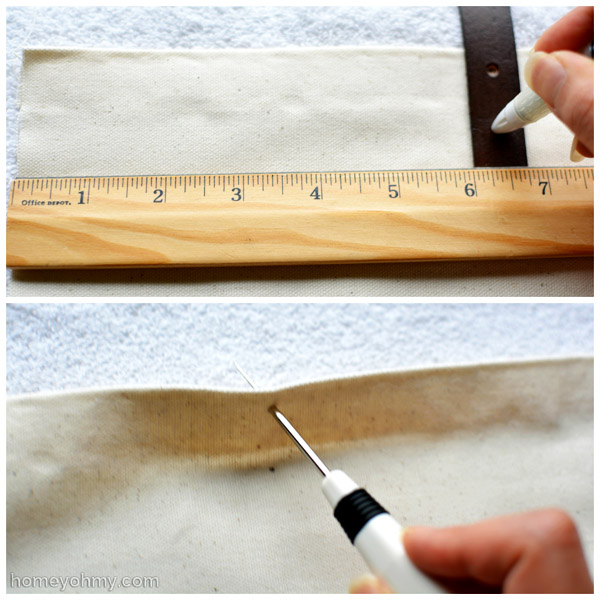 Now for the rivets.  I had the most fun with this because it was my first time working with them and now I want to rivet all the things. 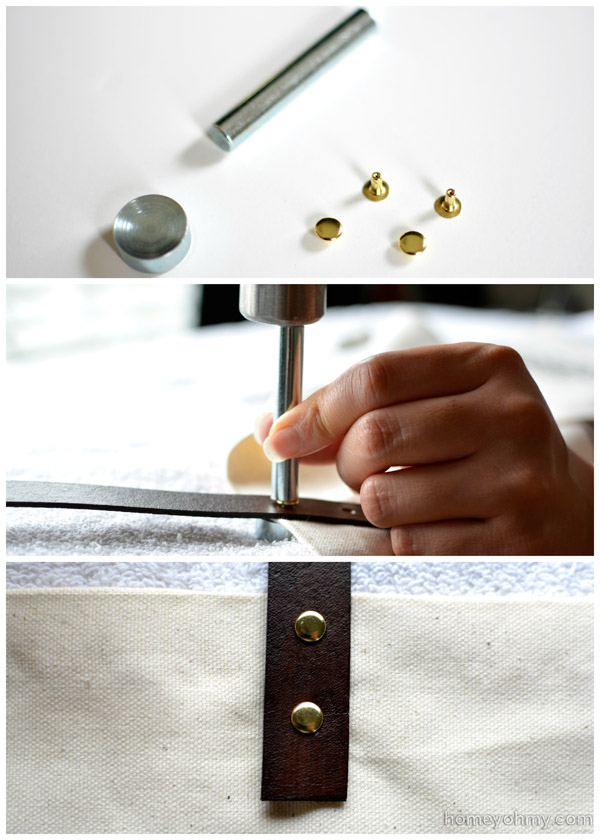 The rivet kit I used came with an anvil, setter, and rivets of several sizes.  I used the smallest (~8mm) rivets.  I pushed the rivet backings through the back side of the holes I previously punctured, lined them up with the holes in the leather handle, then snapped on the cap of the rivet.  I placed each rivet sandwich one at a time on top of the anvil and hammered down to secure the rivet permanently.  Do this on a hard surface!  Not on an ironing board, like I initially tried to do.

Now with the the leather handles attached, I glued both canvas pieces together, front sides facing each other. 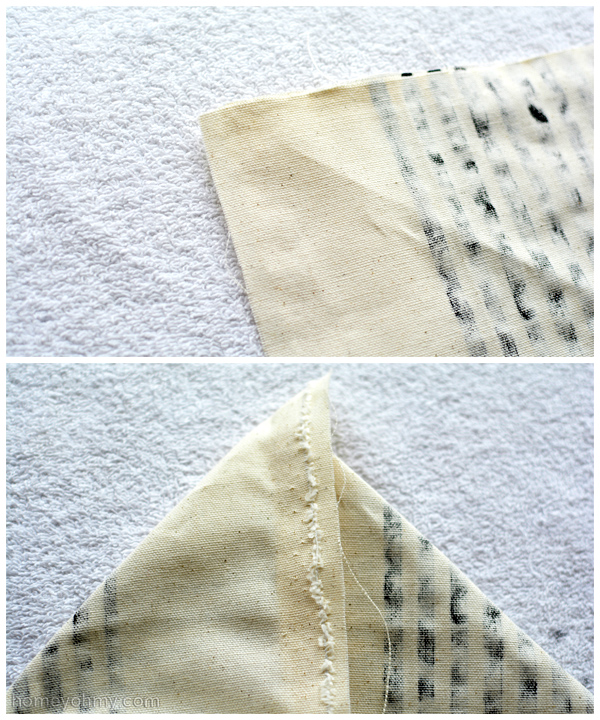 I applied the glue on all three edges (not the top edge where the opening of the bag is) and let it dry.  At the bottom corners, I pinched each side of the fabric (you can see the diagonal fold on one side in the photo above and it’s also on the opposite side as well) and pulled them apart to create a triangle. 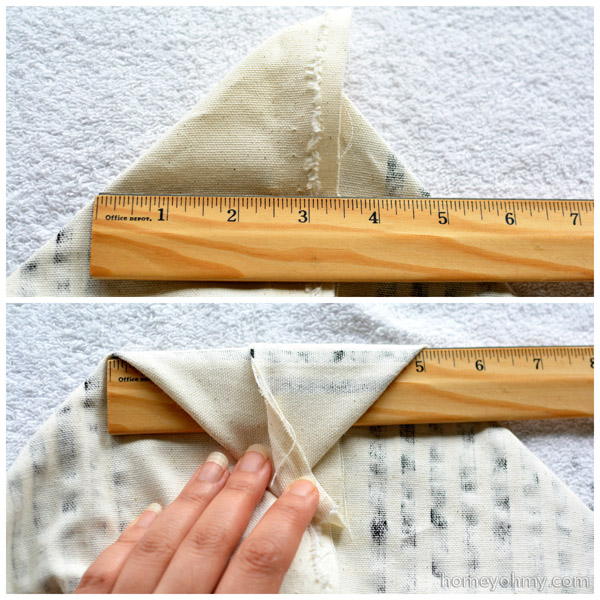 Measuring 5 inches at the base of this triangle, I folded it over to the bottom of the bag and glued it down only under the point of the triangle just to keep it in place.  After doing this to both corners, I flipped the bag inside out while the glue was still fresh, then reinforced the triangle folds by pressing them down.  What this does is create a flat base for the tote bag.  This is where I DIDN’T paint the stripes, which I mentioned before. 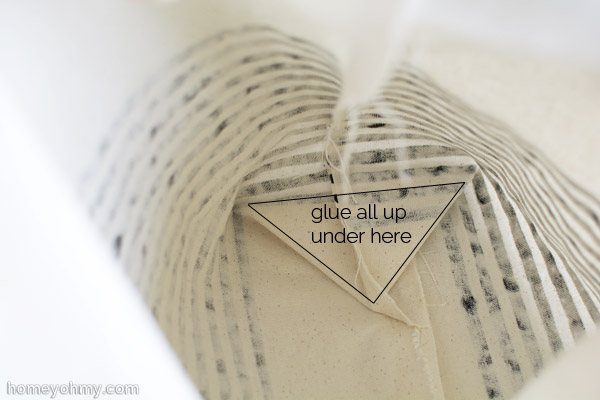 Once here, I lifted up each triangle (glue at the point is still wet) and applied glue all underneath it before pressing it down again to the bottom of the bag.  I held it down a little bit to let it dry a little, then let it dry completely after letting go. 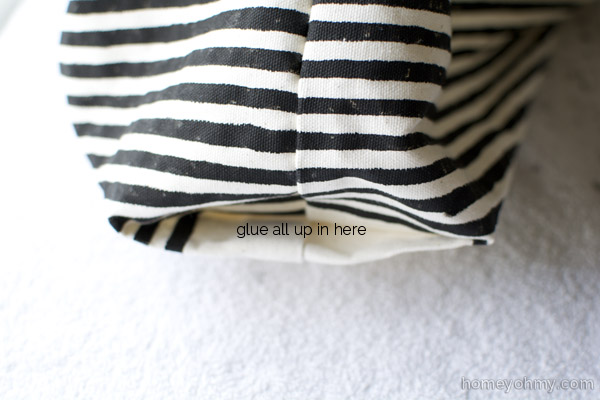 On the outside of the bag, you’ll see that the base of the triangle is unattached from the bottom of the bag.  So, I applied glue in between here, pressed it down, and let the glue dry.  This was done on both sides. 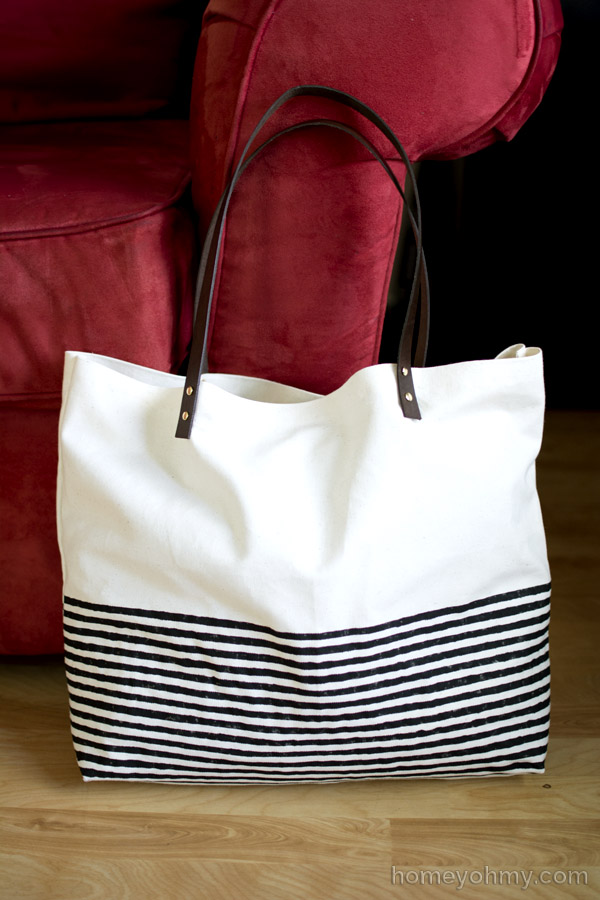 That. Is. It.  Was that enough steps? 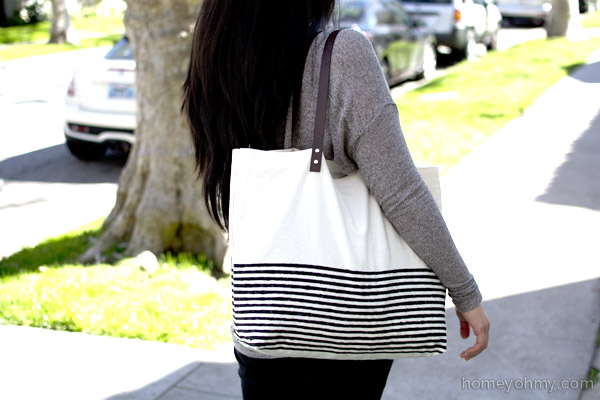 The idea for this tote bag came about when my friend suggested I make one since California now charges for paper bags.  So while this tote makes an excellent, casual weekender bag, it can absolutely be a cute grocery tote as well!  I take it with me to Trader Joe’s and it makes me ridiculously giddy watching the cashier load up my groceries into it because in my head I’m shouting “Yes, it works!!!”  Hoping I don’t continually forget to bring it like I do with every other grocery tote.