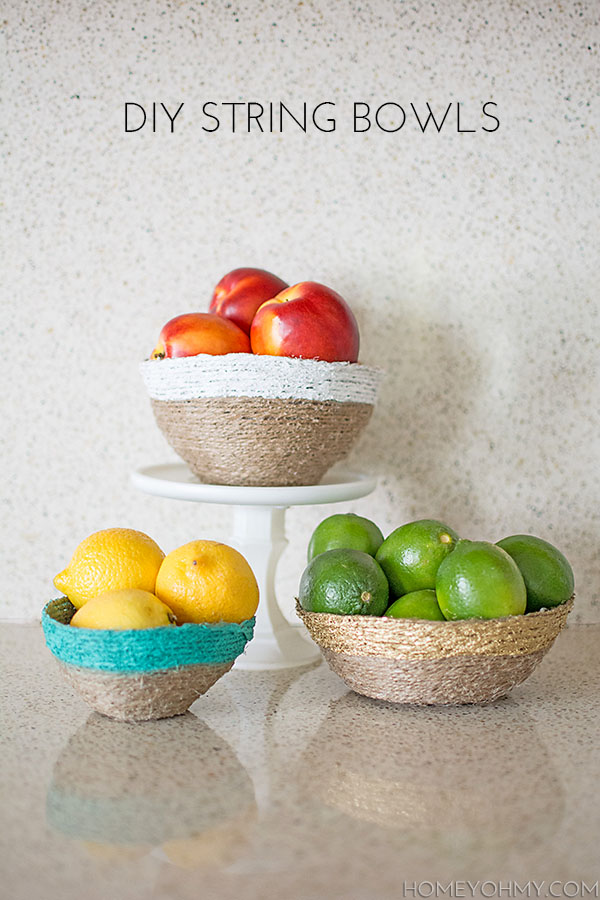 So with summer here (according to the solstice it isn’t officially summer, but to me, my first day back at the beach for the year marks the beginning of summer) I’ve got a bunch of fun, summer DIYs lined up,  starting with this one.  I came across this tutorial for making string bowls at Laughing Kids Learn and while it’s aimed at kids, I think this is a lot of fun for anyone to do.  Plus, it’s super easy and doesn’t require a lot of materials.  Win win win. 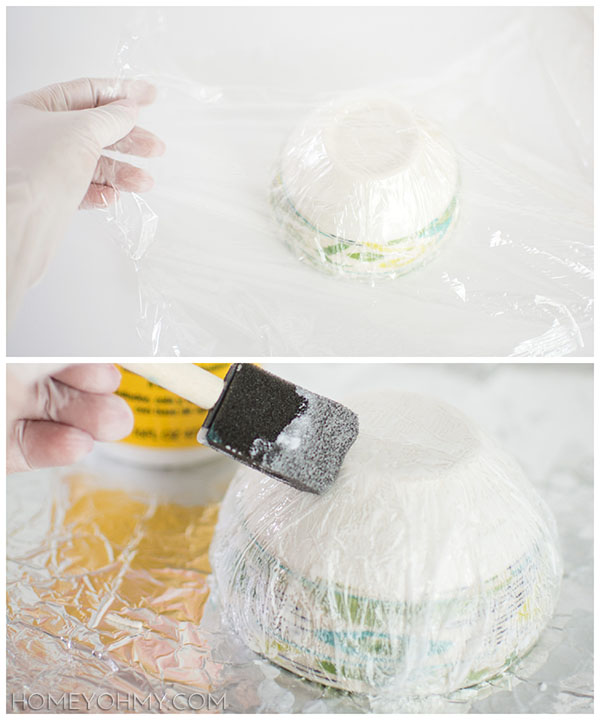 I recommend wearing gloves if you want to get hands-in with the string and possibly adjust it after you’ve slathered it in glue.  First, wrap three layers of plastic wrap around a bowl.  I saw later that the extra layers really help with the removal process of the layer that comes in contact with the string.  Next, slather on Mod Podge over the plastic wrap.  This will help the string stick on to the bowl. 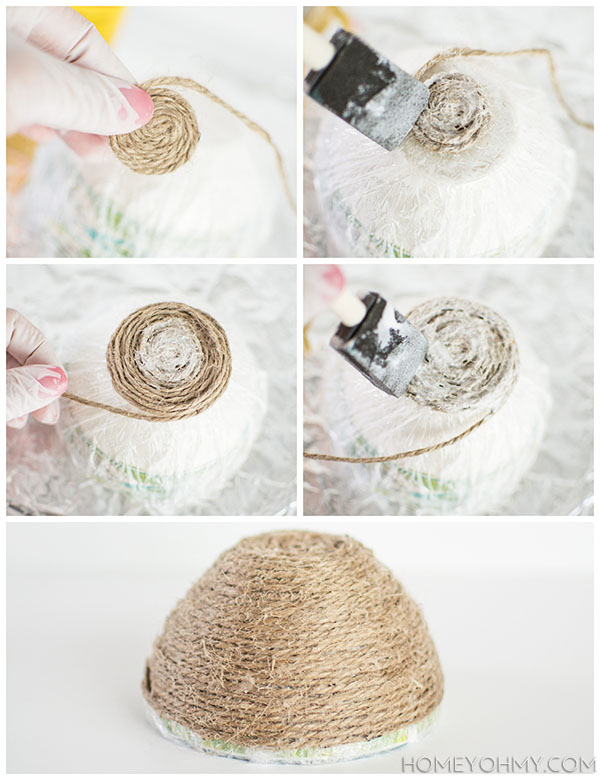 Coil the string until you make a small disc, then stick it on to the center of the bottom of the bowl.  Glob on Mod Podge over the disk, then continue wrapping the string around the bowl while globbing on more Mod Podge all over the string.  By globbing, I mean apply the Mod Podge generously!  Make sure not to wrap the string all the way to the edge of the bowl.  You’ll need this edge to grab onto in order to remove the bowl. 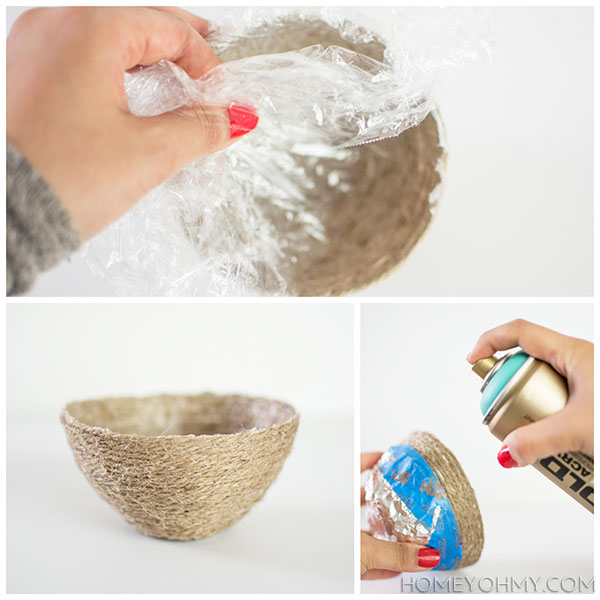 Let the bowl dry completely, then pull down at the plastic wrap while holding the edge of the bowl to remove the string bowl, rotating it so that you pull at every edge and angle.  If I were to do this again, I’d probably spray a light coat of cooking spray on the bowl for easier removal, but you can do without it with just a little bit of patience.  Remove the plastic wrap, then tape on a design of your choice.  I kept it really simple and just spray painted the rims of the bowls, using painters tape and foil to cover the bottom of the bowl. 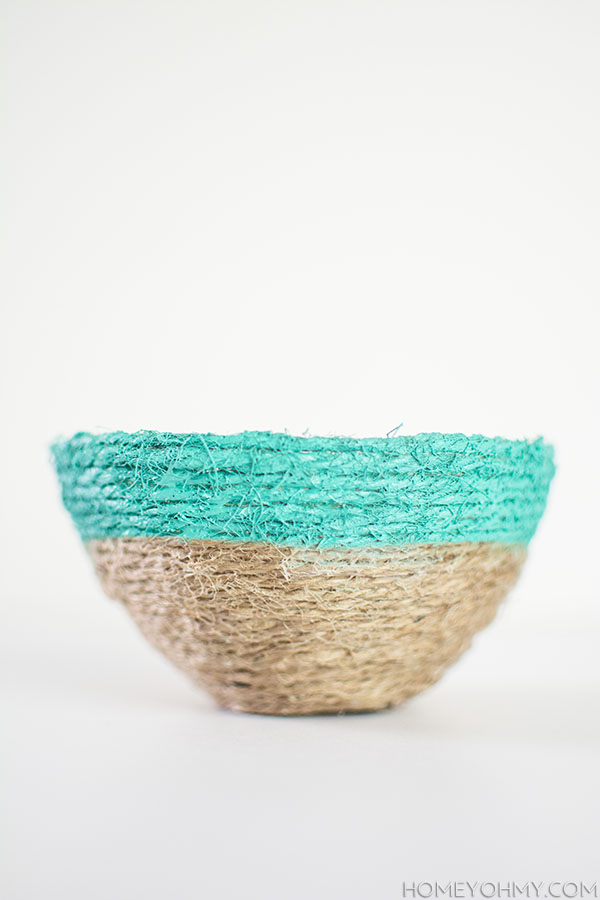 String and glue.  Isn’t that neat?  The bowls are pretty flexible and warp under weight, but they’re still pretty sturdy and hold well. 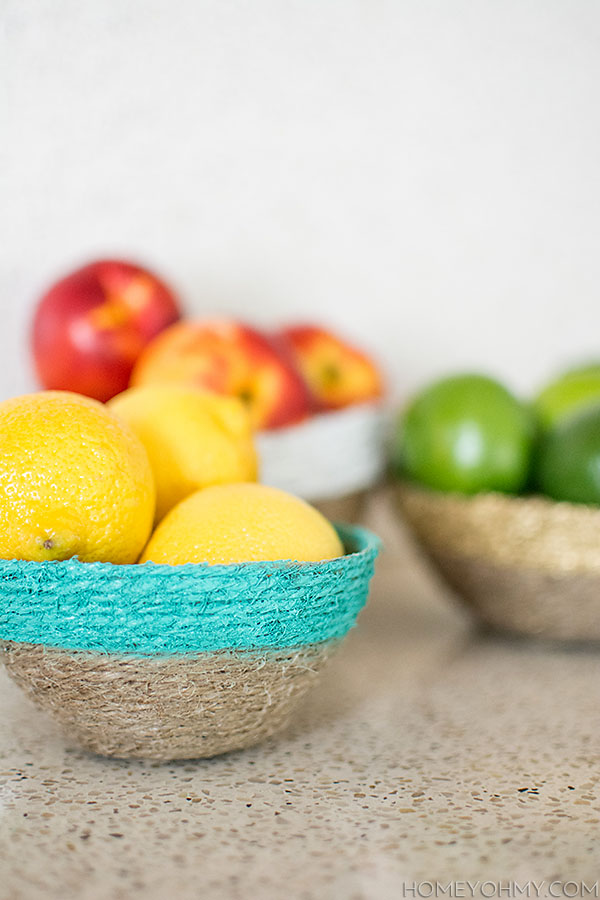 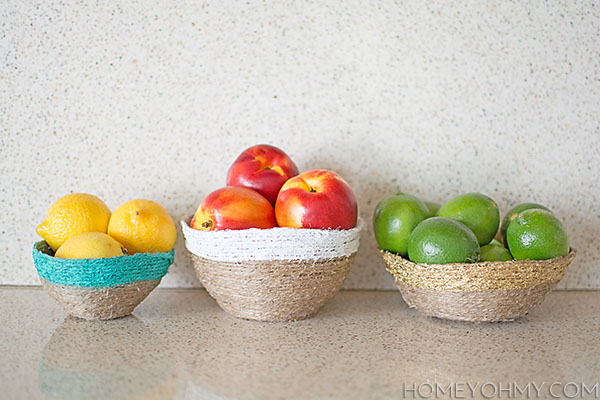 Aside from being functional, they make a cute, summery display when filled with fruit.  I can see myself also using the smallest one as a catch-all, though I already have a bunch around the apartment.  Having a container everywhere to throw random knick knacks into is my favorite way of “organizing”.

What do you think of these bowls?  What would you use them for?