Sure, I probably should wait till everything for the bedroom is done in order to have a grander reveal later, but I’m impatient and just want to talk about things as they progress because I’m too excited and also found that this whole thing is going to take even longer than I planned for (when isn’t that the case) and by the time it’s all done maybe you’ll have forgotten all about this so I gotta hash some stuff out on here along the way or I’ll explode.  Can you all feel me on that?  Good, let’s chat!

First, that gorgeous blue velvet headboard, which is helping me cope with my lack of a blue velvet couch.  It came on Saturday but the bed frame still hasn’t gotten here, which clearly didn’t stop me from building it immediately and taking it for a test run.  The blue is exactly what I had hoped for- more of a royal blue than the navy color it was described as on the Target website. 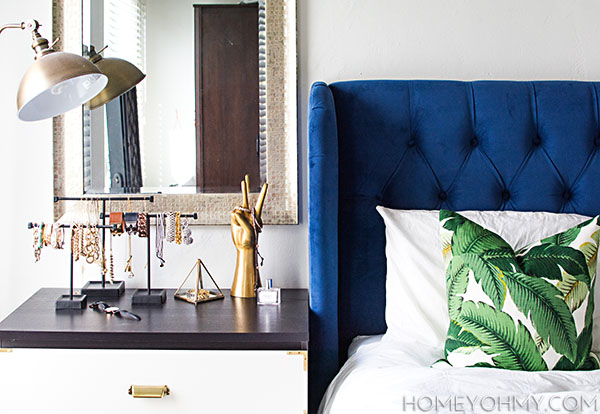 If you had seen the post I did on pillow options I was considering, you’ll recognize that I went with the banana leaf print, which is what most of you voted for and what I was 99% sure about going with (thanks for your input on the that!)

Here’s the thing.  I think the blue and green combo looks super sharp, but I’m having a hard time getting used to it.  As much as I love the banana leaf design and have wanted to bring it home for so long, I’m not sure it’s 100% right for my bedroom now that I’m seeing it all together in person.  I feel like I’d love the pattern more against a black and white palette, but with the blue headboard, it feels a little too energetic when I want to go more for calm.  I’m still contemplating other options to possibly bring the color scheme back to something more neutral, but I do expect that with some more changes they may fall into place better for me. 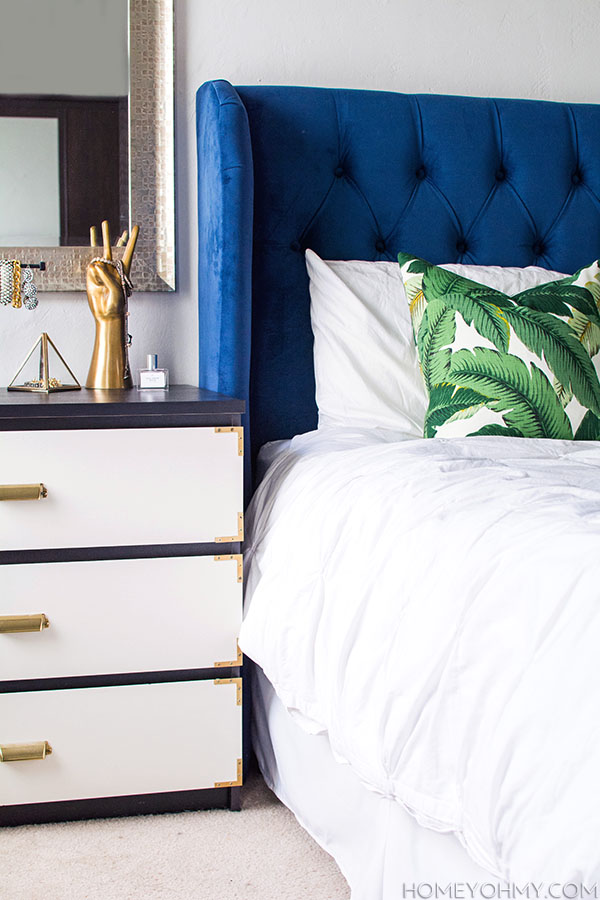 So some changes to come… first I need to say that seeing a space through photos really helps me identify what works and what doesn’t, which is why I even started taking these photos and then now ended up sharing a couple here.  How nicely that worked out!

-Figure out what’s going above the bed.  Original plan was to just hang back up the black and white art that was there before, but it depends on what I do with the bedside mirrors.  I’d love to put nothing above the headboard, but the blank space is extra jarring with the mirrors hung up so high.

-The mirrors on the sides either have to go or get moved further away (with the dressers) from the headboard, though space is already limited.  Because of their size and how close they are to the headboard right now, everything looks a bit cramped.  Going to do whatever I can to make them work because I love those mirrors!!

-Bedding.  The shams and duvet cover I’ve had my eyes on forever are sold out, so I’m just waiting for them to come back… and researching a back-up plan that I hopefully won’t have to use, but basically, the pin-tuck duvet I have right now feels redundant with the tufted headboard, so I’m welcoming a change aka something to carry us between laundry days heyyy.

-Throw for the end of the bed.  Something with texture or a small scale pattern, depending on the pillow situation.

-New sheets.  We’ve been using percale sheets because we wanted something more crisp but they wrinkle so. freaking. horribly. forever.  I’ve never experienced sheet wrinkling so intense like this.  No one wants to iron their sheets, right?  We’re getting new sheets.

Sounds like a lot of changes, but they’re changes I’ve been wanting to make for a while anyway, and oddly this headboard is making them happen.  Any thoughts you have about anything here, let me know about them!  Also if you want more on sources or you’re going through a room update yourself, chat with me about it.